Epocrates on the BlackBerry 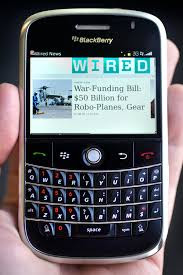 Epocrates started out as a drug database software for handheld computers called PDAs (personal digital assistants). At the time, the dominant PDA was called the Palm Pilot and Epocrates was a free resource. Medical students, residents, and attendings who had Palm Pilots installed and used Epocrates. Epocrates was ubiquitous.

Now, the original Palm OS is dying (some may argue that it's already dead), and many healthcare professionals have switched to the Apple iPhone and BlackBerry. Some are using Windows Mobile and some even still use PDAs and standard mobile phones.

I predict that over the next few years, smartphones will dominate the healthcare industry. The Palm Pre may gain traction quickly, but Android will gain popularity too. So where does that leave BlackBerry? If BlackBerry continues producing devices that leverage the touch screen interface, then Epocrates will be very usable on these devices. Image source: Wired.com
Posted by Unknown at 3:30 AM