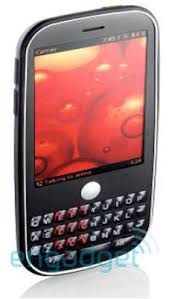 The Palm Eos will be the next smartphone running webOS and it may get released this fall. This won't be a slider. Instead, it will roughly resemble the old Palm Treo candybar model. However, it looks like the screen will be larger and the keyboard won't be curved. I think of the Eos as a bigger, but thinner Palm Centro. I still think the Palm Pre will be more popular than the Eos, but maybe the Eos will appeal to those who want a really thin device.
Posted by Unknown at 8:25 AM