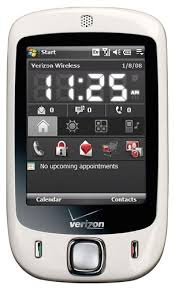 If you're on Verizon Wireless and you're looking for a small touch-screen smartphone running Windows Mobile, then you may want to consider the XV6900 that's only $9.99. It's certainly not the latest or greatest, but it could be a practical option if you're on a tight budget (medical students, did you catch that?). Besides, if you enroll in the "new every two" plan, then you will qualify for an upgrade in two years and smartphones will certainly be much better in two years. Why spend $100-200 for a phone that's probably only going to last 2 years when you can spend $10, right?

You're not going to find the XV6900 in stores. It's only available online (while supplies last). This phone is actually made by HTC and is also known as the HTC Touch, HTC Vogue, or HTC Elf.

Verizon has disabled the built-in GPS on the XV6900, but there are ways you can get around that if you're daring and tech-savvy enough to flash the ROM on your device. You'll even find developers working on custom ROMs running Windows Mobile 6.5.

Here's one other interesting fact about the XV6900 - I believe it's the last smartphone on Verizon Wireless running Windows Mobile that does NOT require a data plan (technically, you sign up for the pay-as-you-go option and that's $0 per month as long as you never use it). If you want to get any other smartphone on Verizon Wireless, you'll have to spend at least $30/month for the data plan alone.
Posted by Unknown at 3:20 AM