Reduced prices on the Apple iPods 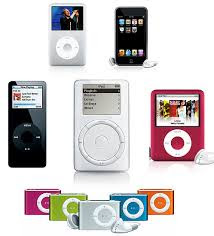 Since Apple just came out with a new line of iPods, you can get some pretty good deals on the older generation (they weren't old last week, but now they're old) iPods. I've gone through several iPods myself and I don't feel the urge to upgrade any of my current iPods, so I won't be making any purchases. However, if you want to get a relatively inexpensive gift for someone, now may be the time to make that purchase while they're available.

Members of my household (yes, we have kids) currently own the following iPod models:
I used to have an iPod nano (3rd generation), but we gave that away. Don't know which model you own? Take a look at this link to "Identify iPod models"
Posted by Unknown at 4:13 AM