Are you getting excited about Droid? 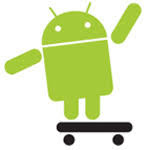 Verizon Wireless is doing quite a bit to promote their upcoming new Google Android-powered smartphones. They're putting almost all the emphasis on the Motorola Droid and practically ignoring the HTC Droid Eris (yes, the name "Droid" will carry through on all the Android smartphones carried by Verizon Wireless). The Eris is really a Hero, but they're calling it an Eris. Confusing, right?

Well, I think it's great to see Google's smartphone operating system finally reaching other major carriers. Maybe we'll see so many loyal Android users that when Verizon finally gets the Apple iPhone, few people will get excited about that.

I love droids. R2-D2 is my favorite droid. I'm happy with my current HTC Touch Pro2 running Windows Mobile, but I think that I may someday become an Android user before I become an iPhone user.
Posted by Unknown at 9:46 PM