Will everyone use a smartphone someday? 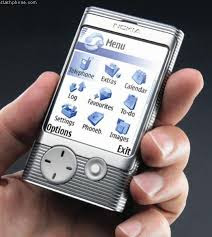 Right now, consumers have the option to buy a "feature phone" or a smartphone (some still call this a PDA/phone or they may refer to the device by the brand - such as BlackBerry, iPhone, etc.)

At what point will feature phones become extinct? When will smartphones dominate the mobile phone industry and become the only option for people who wish to purchase a mobile phone? What if "entry-level" phones are simplified smartphones that run a basic operating system (like Google Android) and rely on a simple touch-screen interface? That's not unrealistic, is it?

In fact, I'm predicting that within a few years, the vast majority of the public will be using some type of smartphone. OK, maybe not the vast majority of the public, but this will be true among health care professionals. Most physicians, nurses, pharmacists, and health care students will be using smartphones. As smartphones become more affordable and easier to use, they will gain tremendous momentum and dominate the marketplace. People will not feel threatened or intimated by smartphones because they will be comfortable with basic functions often found on MP3 players like the Apple iPod and common digital cameras. As a result, a simple smartphone interface will be very easy for most consumers to navigate. Before we know it, everyone will be using a smartphone and the feature phone will be a thing of the past.
Posted by Unknown at 11:49 PM