Android vs. iPhone: who will dominate the health care industry? 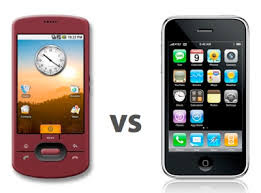 Right now, the Apple iPhone has a clear lead over any smartphone operating system in most hospitals and medical schools in the United States. There are a few medical schools and universities that are still lagging behind and they're relying on Windows Mobile and Palm OS, but the majority of these academic institutions recognize the value of the Apple iPhone and iPod touch. Medical students who are unable to afford a smartphone data plan or who do not wish to switch to the AT&T network, the iPod touch is a great alternative.

In 2010, we're going to see a large number of new Android smartphones appearing on all the major wireless carriers. Verizon, T-Mobile, Sprint, and even AT&T will all offer Android smartphones. Android won't dominate the health care industry in 2010, but what about in 2 or 3 years? What will happen as we compare the Apple iPhone against Google's Android OS? We're bound to see more medical apps appearing for Android. We may see some unique ways that Google will leverage their resources and build the Android OS into an extremely robust OS for the health care industry. We've already seen Google incorporate voice-prompted turn-by-turn GPS navigation into the latest version of Android. Google certainly has the resources to leverage health care resources on the Internet to boost mobile functionality for health care professionals. Will the Google Android OS beat the Apple iPhone in a few years?

I've already been reading that attendees at CES are seeing more Android smartphones among attendees. Gadget-lovers tend to be early adopters, so that's understandable. However, medical professionals like the older generation of physicians are not classically considered early technology adopters. Compare that group to a younger generation of medical students and residents and you have a different mix with a large number of early technology adopters.

So what's going to happen by the end of the year? 2010 has only begun. I'm sure Apple has many different strategies to get their iPhone into more medical schools and hospitals. What's Google doing?
Posted by Unknown at 7:52 AM