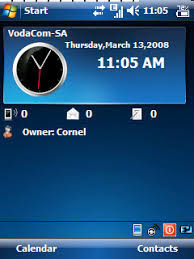 I haven't had a chance to play around with any beta or leaked versions of Windows Mobile 7 so I really can't write about this OS. However, we seem to be hearing enough rumors that Windows Mobile 7 will get released in 2010, so let's see what Microsoft releases this year.
Posted by Unknown at 11:26 PM