I have enough PDAs to create a museum 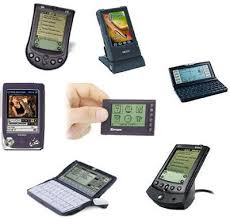 When I retire, I'm going to create a mini museum containing all my gadgets. Right now, I have enough PDAs to create a museum. Some of them were handed down to me for a variety of reasons. Plus, I have several current devices for testing purposes, so I often end up with many new and old PDAs and smartphones.

My oldest PDA probably doesn't technically qualify as a PDA. PDA means “Personal Digital Assistant” and according to Wikipedia:


The term PDA was first used on January 7, 1992 by Apple Computer CEO John Sculley at the Consumer Electronics Show in Las Vegas, Nevada, referring to the Apple Newton.

I have an Apple Newton for my museum. I also have a Sharp Wizard (it was called an electronic organizer) and an original Palm Pilot along with many other "first generation" PDAs. Some of my really old PDAs have dead batteries, so I don't know what I should do with them. The original Palm Pilot only required AAA batteries. The Apple Newton came with an adapter that allowed you to use AA batteries. We don't see this type of battery innovation these days, do we?

So, how many PDAs do you have and do you have enough for a museum?
Posted by Unknown at 6:51 AM