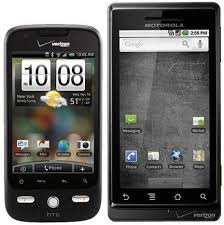 If you're on Verizon and you're thinking about purchasing a smartphone running Google's Android operating system, you may be asking the question: Motorola Droid or HTC Droid Eris? Maybe you're even planning on waiting for the Google Nexus One to show up on Verizon.

Here's how I would make the decision: consider the pros/cons and these important points:
Some people spend way too much time trying to decide on a smartphone. I think it's more important to choose your operating system wisely. If you have limited finances (e.g., medical student or resident), then I would suggest the HTC Droid Eris. If you're an attending (or you have some other source of wealth), then go with the Motorola Droid. Of course, if you're a Mac lover like my wife, then you may be waiting for the Apple iPhone to come to Verizon.
Posted by Unknown at 7:15 AM