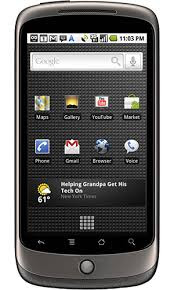 Google has released a system update for its Nexus One smartphone running the Android OS 2.1. With this update, we'll see multi-touch support including "pinch to zoom."

Well, in any case - I'm glad that the Nexus One users can now leverage the capacitive touch screen when they're browsing the web.
Posted by Unknown at 9:00 PM