HTC HD2 about to launch on T-Mobile on March 24 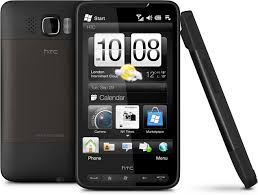 I had the opportunity to play around with the new HTC HD2 smartphone while I was at HIMSS10. This is a really nice Windows Mobile smartphone! (of course, you have to be a Windows Mobile user to appreciate this device)

So what's so great about the HD2? It's very thin, sleek, it has 1 GHz processor, and it has a 4.3-inch WVGA capacitive screen with multi-touch support. This is the first Windows Phone to use a capacitive multi-touch screen. (supporting gestures like pinch-to-zoom)

The major drawback is that it's running Windows Mobile 6.5 instead of Windows Phone 7 Series. I suppose that could be both good and bad. If you'd like to run your old Windows Mobile applications, then you don't want to upgrade to Windows Phone 7 Series. I actually still have several old apps that I'd rather not re-purchase.
Posted by Unknown at 6:37 AM