What's going to be the best smartphone in 2010? 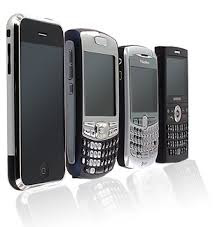 This year, we're going to see many new smartphones. I'm particularly excited about the new Apple iPhone that will probably get announced in a few weeks. This device will allow you to multi-task on the iPhone.

Those on Sprint are probably lining up and getting ready for the HTC Evo 4G. This HTC smartphone will run Android and it will be the first 4G smartphone in the United States.

Verizon users may be happy with the Droid, but we'll probably see a newer version of the Droid later this year. Some dedicated Palm users love the Palm Pre Plus, but what's going to happen with webOS with HP?

T-Mobile customers are probably glad that they have more Android options that go beyond the old G1.

We've heard rumors of a BlackBerry slider. Will this device offer the best of both worlds? A touch-screen plus a hardware QWERTY keyboard?

So, which smartphone will be hailed as the "best" smartphone in 2010?
Posted by Unknown at 7:35 AM