Do you remember your first smartphone? 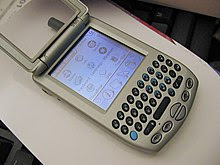 What was your first smartphone? Some of you were early adopters and you may have purchased a Palm Treo 180 back in 2002. Maybe you waited until 2002 so that you could have a color screen and you bought the Palm Treo 270 or 300.  Do you remember the name of the company that made these devices? Handspring.

There are so many young people who will remember the Apple iPhone 3GS as their first smartphone. What a difference to compare that device to some of these old devices! Wow, I used a smartphone back in the dark ages.
Posted by Unknown at 7:13 AM