Is the HTC Touch Pro2 coming to Verizon this month? 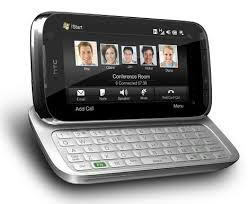 There are so many circulating rumors about the possibility that the HTC Touch Pro2 may be coming to Verizon Wireless this month. Along with those rumors, people are saying that this new Windows Mobile smartphone will be priced at $199. That would seem like a reasonable price if you look at some of the other popular smartphones such as the Apple iPhone, the Palm Pre, and the HTC Hero. Will the HTC Touch Pro2 be the most popular Windows Phone this fall/winter? I think that will depend on when Samsung launches their line of smartphones.

I plan to stick with my current HTC Touch Pro. I just got this phone a few weeks ago! I could theoretically return it since I'm still within the 30 day return period, so maybe I'll change my mind if the price is right. However, I'd rather stick with a free phone for now and then upgrade in a couple of years when Windows Mobile 7 comes out (maybe by then it will be 7.1 or 7.5).
Posted by Unknown at 5:45 PM