GSM version of the Motorola Droid is the Milestone 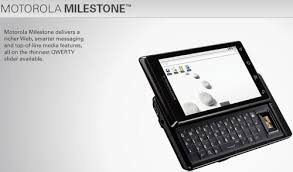 If you're in Europe, then you'll see the Motorola Milestone running Google's Android operating system. It's like the Motorola Droid, but it's a GSM model instead of a CDMA smartphone.

Remember when we used to have TDMA? Things were quite confusing when we had so many different types of phones on the market.

The nice thing is that if you're on a GSM network like T-Mobile, you can get some nice Android smartphones made by HTC. It's a shame that AT&T isn't offering any Android smartphones right now. Apple can't dominate forever with the iPhone, can it?
Posted by Unknown at 3:36 AM