Debating the pros and cons between Android and iPhone 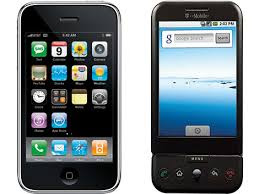 Over the weekend, I got into some interesting debates regarding Apple iPhone vs. Google Android as it relates to the medical community. Here we are right now: it's the early part of 2010 and we're entering the month of February. The Apple iPhone clearly has many more medical apps, but you're limited to AT&T. The Android has many many devices on more wireless networks, but we're limited in the number of medical apps. What's likely to change by the summer? By the fall/winter?

I don't know how quickly the iPhone will get picked up by other wireless carriers. Will it end up on Verizon? Probably. How about T-Mobile or Sprint? Doubt it.

So, the debate continues. If you need a smartphone today, then go with an iPhone and you'll have immediate access to a wide range of medical apps. If you can wait on medical apps, then I would strongly suggest that you get a smartphone running Android. Keep in mind that you're probably going to switch to a new smartphone in 2-3 years, so try not to spend too much money on a smartphone.
Posted by Unknown at 9:37 AM