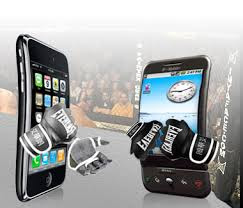 The Apple iPhone is still very popular among health care professionals and medical students. Physicians and nurses love using the iPhone in the hospital and also in the outpatient setting. The interface is so easy to use and there are many apps available for the iPhone. But what if you're not on AT&T? What if you're stuck on a different carrier? Does it make sense to switch to AT&T just to get the iPhone? What about all these stories about iPhones congesting the AT&T network and causing connection problems throughout the country? Will AT&T get this fixed and will they improve their infrastructure to manage the amount of data going through their 3G network?

Google's Android continues to gain momentum as different smartphones appear on almost all the major wireless networks. The Google Nexus One made by HTC is going to appear on AT&T as the first Android smartphone on AT&T. Android users can currently choose between a thin, light smartphone (HTC Droid Eris, Google Nexus One, HTC Hero, etc.) or they can get a slightly thicker model that includes a slide-out QWERTY keyboard (Motorola Droid).

I don't have an iPhone. I have an iPod touch. Therefore, I'm not in any rush to get the iPhone. My wife is dying to get the iPhone when it comes to Verizon. I can enjoy almost all the benefits of having an iPhone without having an iPhone. I'm eager to see what other Android smartphones will get released this year. It's great to see that every Android smartphone has a user-changeable battery. I hope Apple will make that change with the iPhone 4G.
Posted by Unknown at 10:06 PM