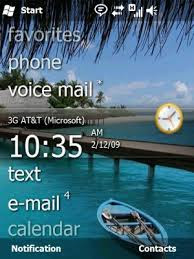 I've been testing Windows Mobile 6.5 for the last week on my Verizon Wireless smartphone. It's an older phone made by HTC and it's branded as the XV6800, but it's really an HTC Titan. I wasn't expecting stellar results because of the relatively slow processor and limited RAM, but I have to admit that it runs quite efficiently. It's a bit slower compared to Windows Mobile 6.1, but I really like some of the new features. I'm currently testing Build 23017 and I'd like to thank the guys at PPCGeeks.com for providing custom ROMs for the XV6800. Build 23022 is out, but it's not ready for mass testing yet.

Some of the nice features found in Windows Mobile 6.5 include:
Since my old XV6800 isn't considered a phone capable of technically running Windows Mobile 6.5, these tests will be limited. However, I do plan to upgrade my phone and I anticipate that my next smartphone will be better suited to run Windows Mobile 6.5. By the way, I'm also using the built-in GPS on the XV6800 and I'm getting a fast satellite lock within a matter of seconds. Once I upgrade my phone, I'll be using this XV6800 as a standalone GPS navigation unit.
Posted by Unknown at 3:24 PM