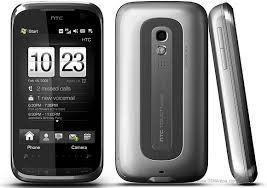 If you're on the Verizon Wireless network and you're debating between the HTC Touch Pro2 vs. the HTC Imagio, let me offer you my 2 cents.

I'll start with the features that are common to both smartphones:
Now, let's talk about the pros/cons (+/-)

HTC Touch Pro2
HTC Imagio
So, the verdict? In my opinion, it's worth having a slightly thicker device if you do a fair bit of texting, e-mail, or any other form of text entry. So, the HTC Touch Pro2 wins. Maybe I'm biased because I've always had a smartphone that's had a hardware keyboard. After trying the BlackBerry Storm for a week, I realized that I am much more productive when I have a physical QWERTY keyboard (or thumb board to be more precise).

However, if you want something that closely resembles an Apple iPhone, go with the thin and sleek HTC Imagio. I don't think you'll be disappointed because the on-screen keyboard is very easy to use and it comes with large on-screen buttons.
Posted by Unknown at 4:01 AM