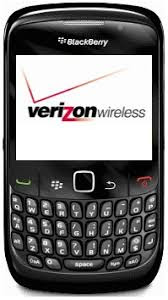 The BlackBerry Curve 8530 will be appearing on Verizon Wireless and Sprint. The best part about this particular smartphone is its price: less than $100. Forget the little trackball. This new model has the optical trackpad. I wonder if that will reduce or increase the incidence of any repetitive motion injuries related to people cranking the trackball or repeatedly pressing buttons on a 4-way navigation D-pad.

The Curve 8530 will come with the BlackBerry operating system version 5.0 and will have your standard BlackBerry screen (not a touch-screen). T-Mobile has a very similar version: the BlackBerry Curve 8520.

I'm a big fan of touch-screen navigation, so you'll never see me carrying one of these. However, if you're looking for an inexpensive BlackBerry that also includes Wi-Fi and GPS, then the Curve 8530 is a nice option.
Posted by Unknown at 4:00 PM